Whenever you are going to rent a yacht charter in Croatia or Croatian yacht charter with a skipper, always pay attention to the local weather conditions in the area. You can find more information about regional sailing winds in Croatia in the Croatia Guide. 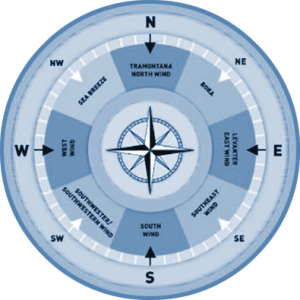 In the central part of the Mediterranean Sea, the weather is affected by many systems and local topography. Hence it is often very unpredictable and fickle. There are many different winds, sometimes blowing from opposite directions at nearby locations. Such conditions can sometimes cause confusion during the navigation; the real weather can turn out rather different from the weather forecast, which can significantly affect the yachtsman’s safety. For instance, a low-pressure region over the Central Adriatic might indicate the strong Bura blowing in the Northern Adriatic, but the southern wind in the Southern Adriatic.

IN GENERAL, THE ADRIATIC WEATHER IS MOSTLY AFFECTED BY THE AZORES HIGH AND THE GENOVESE LOWS. WHEN THE AZORES HIGH IS OVER THE MEDITERRANEAN REGION, THE ADRIATIC WEATHER IS BEAUTIFUL, PEACEFUL AND QUIET. SOMETIMES IT CAN BE MISTY. ON THE CONTRARY, THE GENOVESE LOWS SEND COLD AIR MASSES OVER THE ALPS USUALLY AFFECTING THE CLIMATE FOR A COUPLE OF DAYS.

The Bura is one of the most frequent winds, especially in winter months. It sometimes causes problems for yachtsmen because it comes suddenly and with gale force, even in summer. The main direction of the wind is vertical to the coastline, which means it comes from the northeast (NE). This direction changes considerably alongside the coast, so in some places, the Bura can blow from the E or even the SE. The wind comes in gusts (local name: “Refuli”), down the mountain slopes. In fact, it is cold air that settles on one side of the mountain barriers, and when it “jumps over” this natural barrier, it swoops down the steep slopes. Therefore, the Bura hits the sea surface at a wide angle so, despite its strength and force, it does not raise too high waves. Offshore the Bura subsidies, and the waves become smaller.

The most inconvenient navigation spots in the strong Bura are the Podvelebitski Canal (the Channel under the Velebit mountain range) alongside its entire length, the Senjska vrata (Strait) and the appertaining section of Kvarnerić, Bakarski zaljev (Bay) and Vela vrata (Strait) between Cres and the mainland. In the Central Adriatic, the Bura is severe in the vicinity of Šibenik and Kaštelanski zaljev (Bay), in the Brač Channel – especially in the Bay of Vrulja (between Omiš and Makarska), alongside the coastlines of the Pelješac Peninsula (Žuljan), and around Zaton near Dubrovnik.

When navigating these areas even the smallest vessel’s defect, the engine failure, torn sails, can cause serious accidents. The mainland is always close, the boat is swiftly swerved, and the crew has little time disposable for repair. Falling into the sea in the Bura stronger than 7 point Beaufort scale can be lethal. The wind raises sea drops from the top of the wave, from the crests: it is said that the Bura rises in smoke, and it ‘s hard to breathe.

When white clouds start to gather over the Velebit and begin to descend, then you should become worried. The upper rim of the cloud becomes flat, and when it turns into a horizontal line, we say that there is a cap over the Velebit. It is the beginning of the Bura, so you should beware. Under the extreme conditions of winter navigation the sea drops raised by the wind can freeze on the sails or the deck, so take to the vessel’s stability into account. Throughout the day the Bura often changes its force and is usually weakest around noon. After the sunset the wind suddenly becomes faster, so try to look for a safe refuge before. Having its origin in mind, the Bura in principle does not blow longer than three days. It can seldom last longer, except in the winter.

The Maestral or “sea breeze” is certainly the most comfortable Adriatic wind because it comes in nice and settled weather, i.e. strongly affected by the Azores High. Locally, it results from the difference between the land and the sea temperatures. It mostly blows landwards. The ground warms up rapidly during the day owing to the sun. It starts in the morning from the S or the SW and gradually turns more and more W. In the afternoon in the channels between the islands it becomes NW when it is the strongest. The wind starts to subside at sunset, and the sea calms down completely one-hour after the wind turns in. The sea breeze force is usually 3–5 point Beaufort scale, and only seldom it can reach 6–7, so it can be said to be almost ideal for sailing.

The land breeze is a night wind also caused by the temperature difference between the sea and the land. At night the sea is warmer than the land, and the wind blows exactly in the opposite direction of the sea breeze – seawards. In some regions, this light wind is also called the stiff breeze.

The south wind has a common local name “Jugo” for all the S winds since this is the direction they come from in low pressure. At the open sea, this wind also originates from the S and the SW, and its direction is affected by the coastal relief between the islands and the channels – much less than the Bura, though.

Its main characteristic is that it appears with a drop in the barometric pressure, and a rise in relative humidity, which implies bad weather and rain. The south wind can last for several days and makes people unhappy because the low pressure turns the sky gray and make people gloomy. Besides, the south wind raises big waves, much larger than sometimes wrongfully accused Bura, and the navigation can be very uncomfortable. Namely, the wind comes almost in line with the sea surface, so the friction, alongside the turbulence, raises big waves. Owing to big resistance, the south wind can also cause a high current, sometimes as fast as 2 knots.

The largest accurately measured 10 m wave was registered in the south gale at the Panon platform 30 nm southwards of Pula. Due to its relief and many islands, the Croatian Adriatic coast conveniently offers countless refugees and coves that provide an excellent shield against the south winds. Skilled yachtsmen can usually in only a couple of hours of sailing to find a safe refuge under such conditions. The south wind blows most strongly at the open sea, and in the Northern Adriatic, it is especially uncomfortable in the area of Kvarner and Kvarnerić, and the western coast of Istria. In the Southern Adriatic the wind is stronger at Ploče Cape, and at open sea south off Dubrovnik, and in the Lastovo and Mljet Channels.

The squalls are very uncomfortable and every day is growing in number. They are undoubtedly the biggest threat to anyone sailing in the Adriatic as they come suddenly and with great force. The fact that they do not last for long is comforting, but only fifteen minutes under the gale of 60 or more knots is enough to cause big problems, damage and, not infrequently, victims.

The squalls are mostly a summer ‘specialty’, and they come after a longer period of very hot days and nights. It used to be commonly said that they appear after the Feast of the Assumption, mid-August, but not anymore. Global warming did not pass the Adriatic over, and very high temperatures can cause squalls already in June. They mostly come from the west in the form of an intimidating black stratocumulus preceded by the rain front. In such moments, those who are not moored in the harbor or the marina, or anchored at a proper anchorage, had better quickly set to sail towards the open sea. It is the safest way to avoid damage and troubles. Yachtsmen are recommending, if offshore, to wait for the first gusts, usually with hurricane force, without hoisted sails. After 5–10 minutes, when the first front and the rain pass by, the wind will not only subside, but also show its direction, so it will be easy to make further navigation plans. The summer squalls are more frequent in the northern than in the southern Adriatic, and almost all towns on the western coast of Istria and the harbors facing the W or the NW are jeopardized. Extremely dangerous spots are Poreč, Mali Lošinj, and Hvar. You can expect big, rough waves in their harbors, and the bottom is not good holding.

The west wind, southwestern and the southwest wind refer to any wind coming from the W. They rise when the low-pressure area is north of the Adriatic, and the high-pressure area somewhere in the south. Since the sudden summer storms come from the direction of these winds, their names are often identified with such storms.

During summer the Adriatic is under the pronounced influence of the Azores High which sustains high air pressure. With the view to the fact that during winter months the High moves towards the S, its ridge is no longer an obstacle to the Atlantic Lows coming from the Atlantic. They affect the weather in the Adriatic, often for a long time. Then the low air pressure causes south winds, and sometimes also fog.

The average clouds are 4–5 tenths, and biggest in winter months. In general, coastal towns have a higher percentage of clouds on the average than those on the islands: Rijeka 5.6 tenths and Lošinj 3.2 tenths.

Relative air humidity is lower in summer months than in winter. The average is between 50–80%. There is considerably more precipitation in the Northern Adriatic than in the Southern. It mostly rains in late autumn, especially nearby larger mountain massifs like the Velebit or the Učka Mountains. It rarely snows, almost exclusively in the strong Bura from Mt. Velebit. The islands of Pag and Rab can sometimes turn white for a short time, and it can also snow on the islands of Krk or Cres. The same applies to the mainland from Rijeka to Zadar. Fog is also more frequent in the north, usually along the coastlines of Istria and in Rijeka Bay, but also in the channels in Zadar and Dugi Otok vicinity. In the south, it can appear around the island of Palagruža. Annually there are 10–20 foggy days on the average.

The magnetic variation (declination) is low in the Adriatic, and almost negligible for small boat navigation. Its span is 1°C in the N and 2°C in the S in the Otranto Strait. Some local anomalies are requiring some other equipment than a magnetic compass in the area nearby the island of Jabuka (Vis–Svetac–Jabuka).

Our nautical weather guide can help when sailing the Croatian islands, whether you are sailing with a yacht charter bareboat, motor boat charter, catamaran rental, yacht tours or any other boat holidays in Croatia.